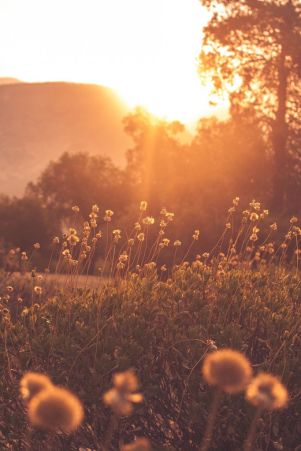 I’m taking part in the wordpress blogging workshop, Writing 101, this month. This is my entry for Writing 101, Day Four: Write about a loss: something (or someone) that was part of your life, and isn’t any more. I wrote it quickly, when my daughter was napping, and published it straight away. I hope you like it.

There’s a picture of Dennis walking towards the camera. The sun is rising over the South Downs behind him: a glorious summer sunrise splaying outwards in beams, illuminating the image in a haze of gold. His gaze is pointing down towards the ground, but he looks happy, and at home.

I haven’t been back to his grave since the funeral. Because for me, he’s not there. His memory is still there in the photo: playing music he loved to people he loved at an outdoor party. I hear his voice on the breeze sometimes, or sense his presence when I hear a particular song. Or I feel his footsteps beside me on the streets of Brighton, the town of my youth, which was never quite the same once he left.

Just yesterday I walked past the elm tree which we once spent a brilliant day underneath. It was a beautiful day; we were all perfectly young, it was a wonderful summer and we all had very little to worry about other than how to enjoy ourselves as much as possible.

Eight years on, passing by that tree yesterday, I still got a lump in my throat as I recalled that time. It’s not been as much fun since he left.

It’s fitting that his namesake was Dionysus, the mythological Greek god of the grape harvest, winemaking and wine, of ritual madness and ecstasy. But there was a lot more to Dennis than simply having fun. He was fearless, and he had a heart as big as the ocean.

I remember the shock of being told he was dead.

It was January and dark. I was standing in the dim orange light of a Brighton street lamp, being held by the person who had come to tell me. I was paralysed, motionless, unable to speak or break free from the hug. Denial, denial, denial at first. This can’t be right. Then abject shock. Numbness. Back to denial. It felt so… final. I had never lost a friend before. He was just 29 years old.

In the aftermath, some said he was heading that way: on a trajectory, burning the candle too much at both ends. It’s a cliché, but all true. Dennis had such strength of character that it feels like all the clichés were written after him.

It had been drugs. I never felt angry at him about it. He wasn’t stupid, he wasn’t a junkie. It was simply a horrible accident. He hadn’t meant to leave, and I had a curious sense that he was angry about it.

Days after his funeral, the wooden archway his family had erected near his grave was destroyed in a raging wind. People said it had been him: tempestuous, forthright, wild.

It wasn’t until several weeks later that I shed a single tear, much as I tried. I was staying with friends on a hillside in Andalucia, looking out over the olive groves and the horses in the field, when someone put ‘Sweet Thing’ by Van Morrison on the record player:

And I will stroll the merry way

And jump the hedges first

And I will drink the clear

Clean water for to quench my thirst

And I shall watch the ferry-boats

And they’ll get high

On a bluer ocean

And I will never grow so old again

And I will walk and talk

In gardens all wet with rain

And I shall drive my chariot

Down your streets and cry

And you shall take me strongly

In your arms again

And I will not remember

That I even felt the pain.

We shall walk and talk

In gardens all misty and wet with rain

Something in the music and in the softness of the spring breeze over the mountains brought him to me in that instant, and I couldn’t stop crying.

As time went by, I mourned – and mourn still – the loss not only of a brilliant young man, but also of the wonderfully eccentric older man he would have grown into. As well as this, I mourn the part of my youth which vanished with him – the part which felt invincible, free and open-hearted, touched by magic. He will always be there, golden in the rising sun.

Nothing I write will ever do him justice, but I know this much: he was my friend, and he was beautiful, and I loved him.

And I will raise my hand up

Into the night time sky

And count the stars

That’s shining in your eye

Just to dig it all an’ not to wonder

And I’ll be satisfied

Not to read in between the lines

And I will walk and talk

In gardens all wet with rain